​Founded in 1932, Sons of The American Legion exists to honor the service and sacrifice of Legionnaires.

Although Sons has its own membership, the organization is not a separate entity. Rather, S.A.L. is a program of The American Legion. Many Legionnaires hold dual membership in S.A.L.

There shall be no forms or class of membership except an active membership.

The S.A.L. has study programs recommended for younger members. One such program, called "The Ten Ideals," teaches the elements of patriotism, health, knowledge, training, honor, faith, helpfulness, courtesy, reverence and comradeship. If a member completes the Ten Ideals program, he is eligible to continue with another program called the "Five-Point Program of Service." This program covers patriotism, citizenship, discipline, leadership and legionism. Sons focus on much more than just membership. At all levels, Sons support The American Legion in promoting a wide variety of programs. Sons assist their posts in other activities such as Veterans programs, Veterans Administration home and hospital volunteerism, Children Youth projects and fundraising.

There are many men who are members of both The American Legion and the Sons of The American Legion. Often, these individuals started out as young members of the Sons. Then, when they were old enough to serve the military, they also became eligible to join The Legion. Such individuals are known within our organization as dual members. The Sons of The American Legion is one of many organizations that sponsors and supports the Citizens Flag Alliance, a coalition formed to secure flag protection legislation through an amendment to the U.S. Constitution. S.A.L. volunteers work to establish local networks by having petitions available and handing out informational material. They alert their communities to the importance of respect for the flag and they encourage flag education programs in schools and other local organizations. 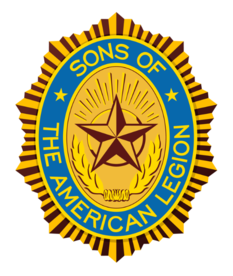 Sons of the American Legion Meet the 1st Monday of the month at 6:00 PM.